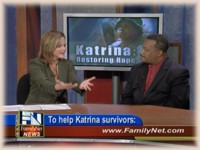 Lorri Allen runs The Soundbite Coach, a company that works with people who want to craft a clear media message and with organizations that want to communicate quickly in a crisis. She is the co-author of Be A Newsmaker: Master the Media with Clarity, Command & Credibility. She’s also the writer and host of a two-part video training series called Media Savvy. As a journalist, Lorri has interviewed more than 5,000 people, and one day she realized that it seemed unfair that some people did better on camera than others. Shouldn’t everybody have the chance to get his or her message across? That’s when she began her campaign to eliminate the fear of the news media.

Lorri coaches newsmakers who want to improve their ability to answer questions or who need confidence in front of reporters. In addition, Lorri provides “insurance” against looking silly or stupid on television.

Lorri is qualified to do this after 25 years as a broadcast and print journalist. She has reported, anchored and produced newscasts, coordinating coverage for events ranging from the local possum festival and state Supreme Court decisions to the Oklahoma City bombing, the attacks of September 11, 2001 and Hurricane Katrina. A career highlight: live coverage of the 2004 National Political Conventions. When Barack Obama was speaking, she predicted we might hear from him again! 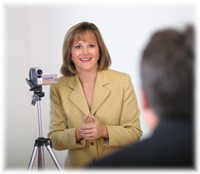 Her clients have gone on to appear on PBS, the Home Shopping Network, FamilyNet, HBO, “Good Morning America,” as well as local news programs.

Lorri can relate to her clients’ challenges with the media because she knows what it is like to be on both sides of the camera. In addition to covering the news for FamilyNet, a network seen nationwide in 32 million homes, Lorri has been the spokesperson for Primedia Workplace Learning, based in Texas. She has been an adjunct instructor at SMU’s Cox School of Business, a radio personality and an entrepreneur.

Lorri earned a degree in Journalism from The University of Texas at Austin and went back to school years later to get a master’s degree at Arizona State’s Walter Cronkite School. She’s a member of the National Speakers Association and its North Texas chapter. She’s finished four marathons and is married to Mark, a brilliant screenwriter and novelist.

Lorri Allen is an award-winning journalist, speaker and proven media consultant. Her workshops help leaders and organizations harness the power of the press.

Positive press is not just a roll of the dice. You can avoid negative impressions and unwanted media attention. If you seek publicity, Lorri coaches you to look and sound your best and broadcast your key messages in one soundbite.